The Mythology of Jyotish

Mythology of Jyotish: Once a great Sage named Durvasa visited Indra, the king of gods, in the heavens. When Durvasa arrived, Indra was seated on a beautiful white elephant, about to leave on a trip. Durvasa went to Indra and offered him a garland of flowers that would never wilt. Indra accepted the garland and put it on his elephant. Unfortunately, the elephant took the garland in his trunk and dropped it on the ground. Then he stepped on it and thoroughly crushed it. As a result, Durvasa became furious and cursed Indra. He said, “It seems that your great wealth has made you too proud. Because of this, you will now lose all the wealth of the three worlds!”

Needless to say, Indra was very shocked and upset, and he even begged the forgiveness of Durvasa, but it was too late. Durvasa said, “I am Durvasa. It is not my nature to forgive.” Immediately the goddess of wealth, Lakshmi, disappeared from the heavens, which made all the three worlds become impoverished. Of course this made living on earth, heaven or even the underworld, totally unbearable. So the inhabitants of all three worlds got together and went to Brahma, the Creator, to help. Vishnu told them, “When times are difficult, living beings need to rely on each other. If you want Lakshmi to return, and to have a prosperous life again, then you need to drink the amrita, the nectar of life. In order to get the amrita, you should put various plants, medicines, shrubs and vines in the great ocean. There is a huge mountain called Mandarachala. You can use it as a rod for churning the ocean. Use the king of serpents, Vasuki, as a rope. Suspend the mountain from the rope and rotate the mountain in order to stir the ocean. When you do this, many things will come out of the ocean, including the amrita, and you will regain your prosperity.”

With Vishnu’s encouragement, the gods and the demons joined together and did exactly as Vishnu instructed. As they churned the ocean, using the mountain as a giant churning rod, the first thing that came out was a powerful poison, which began to kill everything in all three worlds. When this happened, all the gods and demons ran, leaving Vasuki, the serpent god, alone to suspend the mountain. In the darkest hour, when all seemed totally hopeless, Lord Shiva displayed his compassion by stepping in and drinking the poison. The poison lodged in his throat, turning it blue. To this day he is called Neelakantha, the blue-throated lord. He gained victory over death, so he is also called Mahamrityunjaya, the great conquerer of death.

After that, the gods and demons returned and began the churning process again. The next thing to come out the ocean was Alakshmi, the older sister of Lakshmi. She is the goddess of misery. She asked the gods how she could help them and they said, “Please go stay in the homes of people who fought with their family members, use foul language, lie, and sleep at the hour of sunset.” She agreed.

After braving these initial negative manifestations, the effort of the gods and demons was rewarded and the Moon god came out. The next to come out was Varuni Devi, the goddess of intoxication. Then many other auspicious things continued to come out of the ocean until, finally, Lakshmi herself rose from the ocean. At last, a radiant man named Dhanvantari with a dark complexion, decked in shimmering gems, and holding a pitcher of amrita, came out. This caused the gods and demons to fight over the amrita, and the demons grabbed the pitcher and took it to the underworld.

The gods, of course were very disappointed. After all this work, the demons had stolen the amrita for themselves. Vishnu, however would not allow this to happen. He took the form of Mohini, an enchanting, seductive woman. He went to the demons and danced for them. The demons were so consumed with lust that they became hypnotized by Mohini. She then called in the gods and had them sit in a row on one side, while the demons sat in a row on the other. As she kept the demons mesmerized with the seductive movements of her scantily clad body, she served amrita to each of the gods.

It was at this point that a giant and powerful demon saw through her ploy and disguised himself as a god, in order to partake in the divine nectar. He sat down between the Sun and the Moon. When his turn came, he began to drink. At that moment, the Sun and the Moon guessed his true identity and immediately told Mohini. She instantly resumed the form of Vishnu and threw a discuss at the demon, cutting of his head. The head became Rahu and the rest of the severed body, became Ketu. Because of their betrayal, Rahu and Ketu continue to bear a particular grudge against the Sun and the Moon. 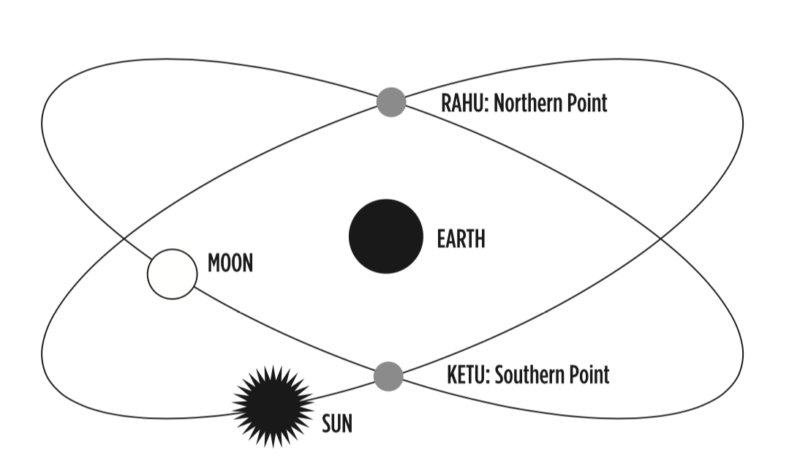 Ancient puranic stories such as this one hold a lot of inherent wisdom that allows us to understand the true nature of ourselves, and also of the energetic influences that imprint on our psyche’s.

Rahu and Ketu are two of the most influential (some would argue the most influential) planets that rule the sky along with our birth charts. Considered shadow planets, these two grahas are mathematically positioned points within the orbital patterns of the sun and the moon – the points at which eclipses happen. While the orbits of the sun and moon are independent, they influence each other in their dance, intersecting several times a year to create either a solar or lunar eclipse.

The nature of Rahu and Ketu is that of transformation on a deep, karmic level. Rahu, the severed head, represents our obsessions in life, our desire to consume without the ability to digest. Rahu represents inexperience and the need to push a little further, to go a little harder. Rahu wants to continue tasting the amrita, and without a body, there is nothing but pure sensory pleasure driving his desires. Ketu on the other hand, is representative of pure detachment. The body without a head, Ketu is found in the things that we’ve already mastered, the parts of ourselves that we must detach from in order to experience liberation, or moksha.

The nodes of Rahu and Ketu are present in all birth charts and live exactly opposite of each other, just 7 houses away. In the sky, the nodes change signs every 1.5 years, producing karmic lessons and fruits that reflect the nature of their position in the zodiac. It is important to pay attention to these nodes, and understand that while their reputation may be malefic, their true nature is that of karmic evolution and eventually, liberation.